While scanning a Solar System poster and comparing the planets' distances from the sun I noticed a pattern I'd not seen before. I've been fascinated by space since I was a young child and have been studying astronomy in one form or another all my life but I'd never heard anything like this pattern mentioned. 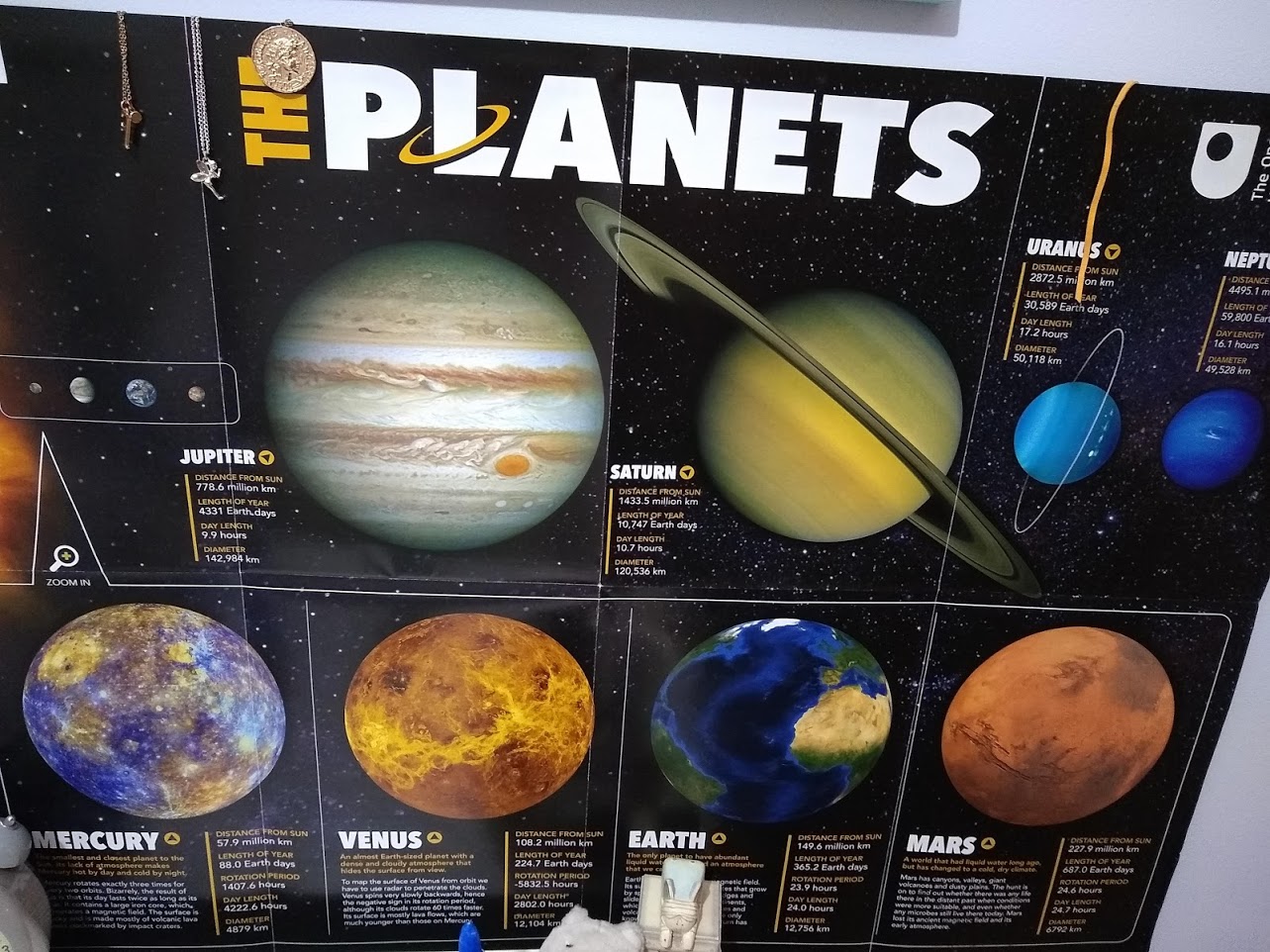 Here are the planets' distances, copied from the poster, in millions of kilometres:

The exception was a gap between Mars and Jupiter. Discounting that, I worked out that a multiplier of 1.7 (rather than 2) would fit better. This is a geometric progression with the formula:

where 57.9 is the distance of Mercury, the starting point, and n is the planet's position from the sun (with Mercury being 0). We're working in millions of kilometres throughout.

Treating the gap as a planet made the formula fit. Then it clicked - the asteroid belt is between Mars and Jupiter. So where there should be a planet instead was a ring of asteroids. Maybe there used to be a planet there and it disintegrated?

I did a bit of digging and found there was a 2015 NASA mission to Ceres which was the largest asteroid between Mars and Jupiter. For some reason I'd thought Ceres was out beyond Pluto (probably getting mixed up with Eris). In 2006 it was reclassified as a dwarf planet. It's recently been found to have sub-surface oceans. The latest thinking is not that there was a planet there that exploded but that one never quite formed in the first place - probably because Jupiter became so massive.

So why had I never heard anyone mention this pattern? It doesn't seem to be very well known, but I did find a Wikipedia article about a similar theory that was discovered in 1715 (https://en.wikipedia.org/wiki/Titius–Bode_law). The Titius-Bode formula was:

You can see it's based on the doubling of the previous distance that I initially spotted.

The Titius-Bode law predicted the distances up to Uranus (and pointed to the missing Ceres which was subsequently found in 1801), but failed to predict Neptune's position and so was discredited.

My version of the formula, with 1.7n, is a better fit for Neptune and Pluto.

Is this a universal pattern? In recent years we have information about planets around other stars that we can test the formula against. From Wikipedia:

"Bovaird and Lineweaver applied a generalized Titius–Bode relation to 68 exoplanet systems that contain four or more planets. They showed that 96% of these exoplanet systems adhere to a generalized Titius–Bode relation to a similar or greater extent than the Solar System does. The locations of potentially undetected exoplanets are predicted in each system."

I suppose a "generalized Titius–Bode relation" means something like the 1.7n formula. It sounds like it's time for Titius–Bode to be re-credited and made more popular and, since it applies to many star systems, time for an explanation as to why planets should evolve into such a pattern. It could also help with the search for habitable planets.

Why did it take me so long to spot this pattern? I thought I had a decent grasp of the relative distances of the planets but it took me staring at the poster night after night looking for interesting things to discuss with my daughter for me to see it. The planets are rarely pictured with comparative distances and instead shown "not to scale". And I suppose a large part of learning is taking the facts we're given for granted and we assume that all the interesting things must have already been discovered and so we don't bother to look for them. But we should: it's very satisfying finding them for yourself.